‘Save a Life’ initiative by JAIHIND on this Independence Day

Every year JAIHIND undertakes some social initiative on the Independence Day that reflects the true spirit of ‘Jai Hind’.

‘Save a Life’ is being organized by JAIHIND in association with Think Health and is supported by Brihan Maharashtra College of Commerce (BMCC), Software Exporters’ Association of Pune and Radio City. Medical Staff from a renowned local hospital will conduct the training session at BMCC College premises on August 15th between 9:00am and 1:00pm.

CPR in simple words means keeping the heart and brain functional when the body fails to do so, until professional medical help is available. This training camp will empower individuals to save critical lives by being aware and equipped to deliver CPR in a required situation.

Alok Avasthy, Commandant of the 5th battalion of the National Disaster Response Force (NDRF) who led the complex rescue operations of Malin disaster will inaugurate the ‘Save a Life’ initiative. He will also speak on the need to have emergency training for the citizens to deal with emergency like situations.

A fashion show for the differently abled!

On 15th August 2012 our country witnessed its 66th year of independence. Puneites celebrated Independence Day and took  pride in India’s historic triumph over the British. With all due respect to our freedom fighters, we continue to enjoy our freedom due to the never-ending efforts taken by the Indian Army, Navy and Air Force, every day. While some of our brave soldiers have laid down their lives for the country, others have been rendered paraplegic while protecting the nation.

Jaihind, Pune’s leading fashion house for men, thought of making a meaningful contribution to the lives of these paraplegic heroes of the nation. To this end, Jaihind organized the Jaihind Paraplegic Fashion Show on 15th August. A first-of-its-kind,  unique fashion show to honour and recognise the invaluable sacrifices of the contestants, all of whom are from the Paraplegic Rehabilitation Centre (PRC), Kirkee.

The theme for the fashion show was ‘Colours of India’, the announcement of which was done at the PRC premises on 13th August. The12  participants were also taken through a training session with the choreographer Ms. Kirti Advani, Dancing Curve. For the final showdown on Independence Day, the contestants graced  the ramp in fashionable apparel by Jaihind at the Laxmi Road store. The fashion show was a serious social initiative for Jaihind, as the judges for the event were:

Mr. N. B. Gurung was  announced as Mr. Jaihind and got a prize from Jaihind. Mr. Amol Boriwale and Mr. Faiyaz Alam  were announced as runner ups.

What’s more, Jaihind donated Rs.1 Lac, whichever is higher, to the Paraplegic Rehabilitation Centre. This innovative fashion show, put Jaihind in a league of its own, among all of Pune’s men’s fashion stores. Not only is Jaihind giving a befitting salute to these men of honour but also showcasing how organisations today play a bigger role in the way our society is shaping up.

Kunal Kapoor on the ramp for the JAIHIND Tiranga Fashion Splash

As per the tradition, every Independence Day JAIHIND undertakes some activity that reflects the true JAIHIND spirit. Last year it was special show by members of the Army’s paraplegic rehabilitation center, whereas this year a platform was given to all aspiring models through ‘JAIHIND Tiranga Fashion Splash’ drive to become a part of a show where they had a chance to share the ramp with none other than Kunal Kapoor.

A Facebook campaign that was launched to attract entries received tremendous response with over 300 plus applications, of which 10 were selected for the fashion show. All those selected aspiring models were then given some amount of training before they walked the ramp. The collection from JAIHIND displayed vibrant colours which raised a sense of both patriotism and fashion.

Apart from a fashion show, a short performance by the kids of The Poona School & Home for the Blind Trust enthralled the audiences. Dinesh Jain, Managing Director of JAIHIND made some donation for the trust on the occasion.

The winner of the fashion show, Tarun Malhotra, won himself a chance to be casted in the next JAIHIND ad campaign, where as Akash Goswami and Sashikant Sharma were the runners up of the show. 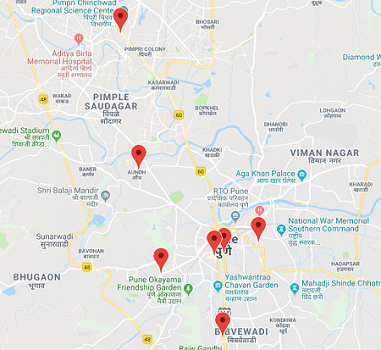